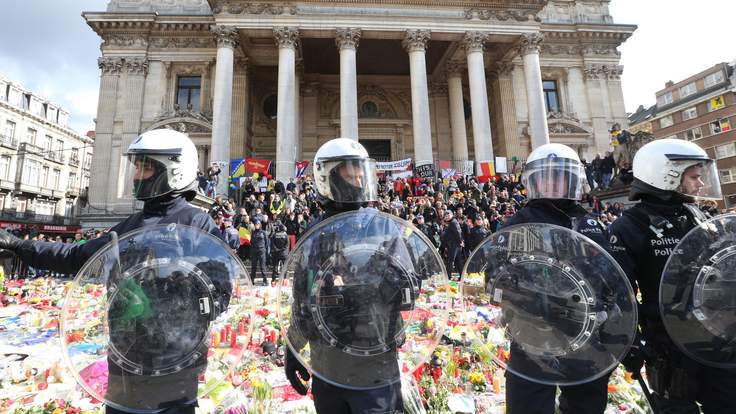 Riot police have been deployed following angry scenes at the Brussels square where tributes have been left to Tuesday’s terror victims.

Police fired water cannon to disperse hundreds of suspected far-right protesters who disrupted a peaceful gathering at the Place De La Bourse.
The protesters, many of them dressed in black and wearing balaclavas, chanted nationalist and anti-immigrants slogans as they made their way into the square.
“This is our home” and “The state, Daesh accomplice,” they shouted in unison, referring to the so-called Islamic State group which said it carried out for Tuesday’s twin attacks.
Several members of the crowd unfurled a large banner with an anti-IS message on the steps of the Brussels Stock Exchange.

A number of the protesters then set off firecrackers and threw signs as they were confronted by police.
Around 10 people were arrested at the scene, police said.
A March Against Fear had been due to take place at the square, which has become a shrine to the victims of the attacks.
It was called off by the event organisers after Belgium’s interior minister urged protesters not to attend, saying police were too stretched.
Hundreds of people were nevertheless gathered to pay their final respects when the protesters invaded.
Sky’s Enda Brady, who is in the Place De La Bourse, said protesters have now been cleared out of the area and the atmosphere is calm.
Police in Brussels carried out 13 new raids on Sunday, taking nine people into custody for questioning and releasing a further five.
Authorities also charged another man – who was shot by police at a tram stop on Saturday – with membership of a terror group.

It comes a day after a man identified as Faycal Cheffou was charged with terrorist murder, participation in a terrorist group and attempted terrorist killings.
Reports suggesting he may be the so-called “man in white”, who fled the airport in Brussels after his bomb failed to detonate, have not been confirmed.
Two other men, pictured on CCTV moments before the attack, blew themselves up in the airport departure lounge.
An hour later another bomb exploded on a subway train as it was pulling out of the Maalbeek metro station.

Police have revised the number of people killed in the attacks, confirming the three suicide bombers killed 31 people – 15 died in the airport blast and 13 in the metro explosion.
Read on: http://news.sky.com/story/1667909/riot-police-confront-mob-in-brussels-square