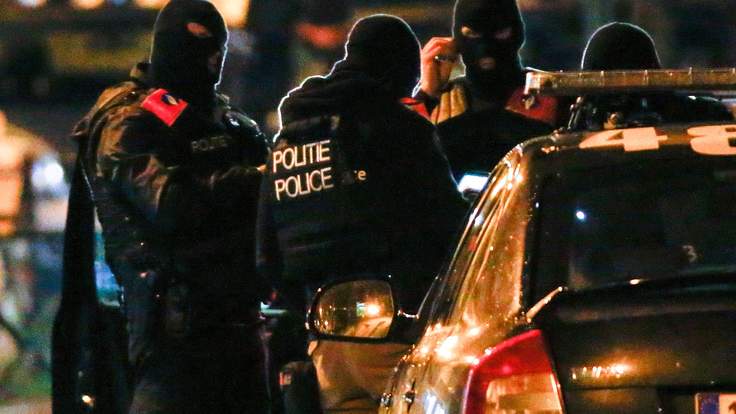 News.sky.com announced a few hours ago that Nineteen raids have been conducted in Belgium, with one detainee left injured after his car tried to ram police during a getaway.

Sixteen people have been arrested following raids across Brussels – but Paris suspect Salah Abdeslam was not among those detained.

At a news conference, officials said a total of 19 houses were searched in the city – and during the operations, police fired two shots at a vehicle in Molenbeek.
One of those arrested was injured when his car tried to ram into police during an attempted getaway.
Eric Van der Sypt, a Belgian federal prosecutor, said no firearms or explosives were discovered – and added that although the police raids have ended, their investigation is ongoing.
According to Sky’s Enda Brady, who is in Brussels, there are some unsubstantiated reports in Belgian media that Abdeslam was in a BMW heading towards the German border.
With an alleged terrorist still at large, schools, universities and the Metro transport system in Brussels will remain closed on Monday – as the Belgian Prime Minister expressed fears that individuals could “launch several attacks at the same time in multiple locations”.
Brussels remains on the highest terror threat level, which indicates that an attack is “imminent” – while the rest of the country is on the second-highest level, to reflect an incident is “probable”.
The army and police presence has been boosted in the capital to protect targets such as shops and public transport.
Belgium has been at the centre of investigations into the Paris attacks after it emerged that two of the suicide bombers lived in the poor district of Molenbeek.
[youtube https://www.youtube.com/watch?v=xr3dxBU0qwQ&w=560&h=315]
French police have issued a photograph of the third man involved in the suicide blasts at the Stade de France – with officials admitting they do not know who he is.
A police source fears that Abdeslam, who is said to have travelled from Paris to Belgium shortly after the French massacre of 130 people, could be “trapped and desperate” in Brussels.
The city is on edge, with a number of bomb scares, including the closure of a railway station and the evacuation of TV station VTM, causing disruption.
Football matches and many large events were postponed over the weekend.
Link To Full Story:
http://news.sky.com/story/1592320/brussels-16-held-but-paris-suspect-still-at-large