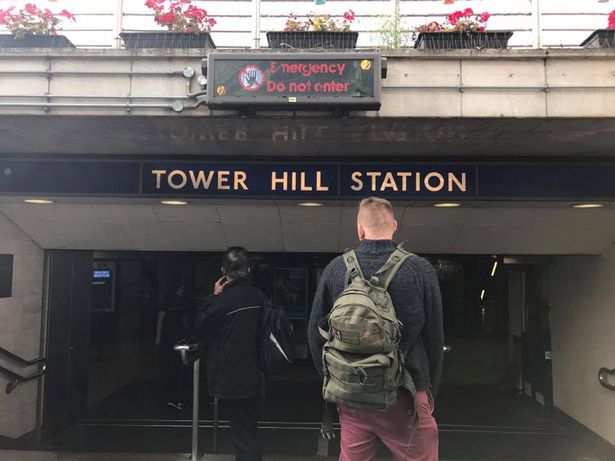 Terrified passengers fled Tower Hill Tube station after a mobile phone charger overheated and ‘exploded’, sparking a small fire and injuring a man.
The incident, just days after a terror attack on the Underground, led to scenes of panic at the station near major tourist attractions in east London.
Witnesses said terrified passengers fled in a stampede after a ‘small explosion in a bag’ on the westbound District line train.
Photos posted online show an object on the floor in flames, while video shows people running from the train.
Police confirmed that the incident was not suspicious and a faulty mobile phone charger was to blame. A man suffered an injury to his hand.

The force later tweeted: ‘Incident at Tower Hill station is not suspicious. Fire believed to have been caused by mobile phone charger overheating.’

London Fire Brigade tweeted: ‘We’ve dealt with a small explosion on a train at Tower Hill station. It is believed to have been caused by a mobile phone charger.’

Pictures from outside the station show crowds of passengers who have been evacuated onto the pavement. A spokesman for the Ambulance Service said one person had received minor injuries.

Transport for London said there was disruption on the circle and district lines while the matter is dealt with.

A British Transport Police spokesperson tweeted: “Incident at Tower Hill station is not suspicious. Fire believed to have been caused by mobile phone charger overheating.”
The force evacuated the station, near Tower of London and Tower Bridge, just before 12.30pm over what it initially described as a “security alert”.
Twitter user Murtaza Ali Shah, who posted video of the closed station, wrote: “Tower Hill Station closed after a small scale explosion in a bag, passengers fled in panic, injuries n stampede.”