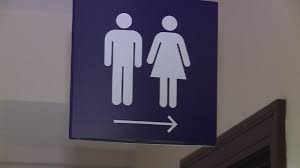 A federal lawsuit was filed Monday against the North Carolina governor and other state officials over a new law that blocks transgender individuals from using public bathrooms that match their gender identity and stops cities from passing anti-discrimination ordinances to protect gay and transgender people.

Two transgender men, a lesbian, the American Civil Liberties Union of North Carolina and Equality North Carolina want a judge to declare the state law, House Bill 2, unconstitutional and a violation of federal laws banning sex discrimination.
“While the discriminatory, stated focus of the legislature in passing H.B. 2 — the use of restrooms by transgender people — is on its own illegal and unconstitutional, H.B. 2 in facts wreaks far greater damage by also prohibiting local governments in North Carolina from enacting express anti-discrimination protections based on sexual orientation and gender identity,” the lawsuit says.
The suit was filed Monday in U.S. District Court for the Middle District of North Carolina. The defendants are Gov. Pat McCrory, state Attorney General Roy Cooper III, the Board of Governors of the University of North Carolina and board Chairman W. Louis Bissette Jr. Two of the plaintiffs are university system employees, and one is a university student.
McCrory signed the bill, called the Public Facilities Privacy & Security Act, on Wednesday.
The General Assembly went into special session that day to push through the legislation.
The law came in response to the city of Charlotte’s nondiscrimination ordinance that, among other things, made it possible for transgender individuals to use public bathrooms of the sex with which they identify.
Equality North Carolina and other groups quickly attacked the legislation, but lawmakers defended it.
“One of the biggest issues was about privacy,” North Carolina House Speaker Tim Moore said. “The way the ordinance was written by (the) City Council in Charlotte, it would have allowed a man to go into a bathroom, locker or any changing facility, where women are — even if he was a man. We were concerned. Obviously there is the security risk of a sexual predator, but there is the issue of privacy.”
Georgia has also received attention recently after its state Legislature approved a bill that would allow religious groups to deny service to lesbian, gay, bisexual and transgender people.
Source:http://edition.cnn.com/2016/03/28/us/north-carolina-gender-bathroom-lawsuit/index.html