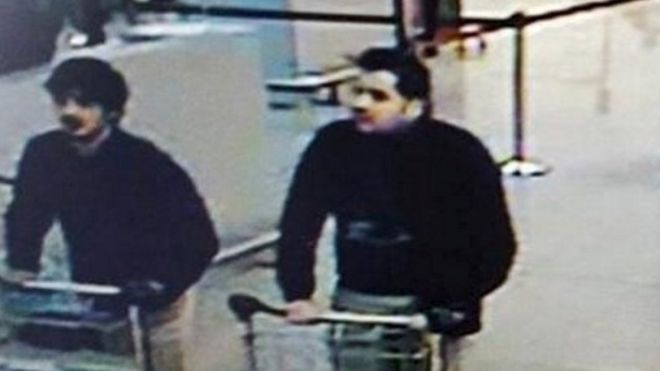 Two suicide bombers who attacked the international airport in Brussels have been named by as the brothers Khalid and Brahim el-Bakraoui.

The RTBF broadcaster said the pair were known to police. A third man pictured with them at the airport is still being sought.
Twin explosions at the airport and another at a metro station on Tuesday left about 34 dead and 250 wounded.
Belgium is observing three days of national mourning.
So-called Islamic State (IS) has said it was behind the attacks and warned that more would follow.
A minute’s silence for the victims will be held at midday (11:00 GMT).
Brussels attacks: Latest updates
RTBF said the brothers were known to police and had criminal records.
The broadcaster said that Khalid el-Bakraoui had used a false name to rent the flat in the Forest area of the Belgian capital where police killed a gunman in a shootout last week.
It was during that raid that police found a fingerprint of Salah Abdeslam, the main suspect in the Paris terror attacks of 13 November. He was arrested in a raid last Friday.
Belgian newspaper La Derniere Heure said Khalid el-Bakraoui was being sought for terrorist activities while Ibrahim was reportedly on the run after a sentence for other criminal activity.
La Derniere Heure also said that the third man in the airport CCTV image of the three men handed out by police is Najim Laachraoui.
Laachraoui was named earlier in the week by police as a wanted accomplice of Abdeslam.
Source: http://www.bbc.co.uk/news/world-europe-35879141