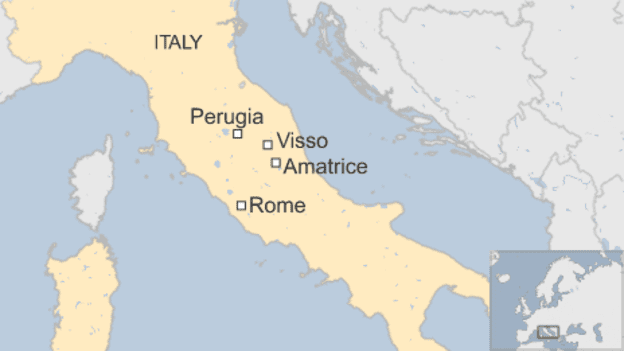 A 5.5-magnitude quake struck at 19:10 (17:10 GMT) near Visso in Macerata province, followed two hours later by a 6.1 magnitude tremor in the same area.
Emergency teams have worked through the night. In August an earthquake killed about 300 people south of Visso.
There are few reports of serious injuries but bad weather has been hampering efforts to assess the damage.

Visso is 70km (45 miles) from Amatrice, which was badly damaged in the 6.2 magnitude quake in August.

Wednesday’s earthquakes were felt across central Italy, including in the capital, Rome, where buildings shook and doors and windows rattled.
“Tens” of people were hurt, but only four people suffered serious injuries, Italy’s civil protection chief Fabrizio Curcio said.
The second earthquake was considerably stronger than the first and numerous smaller aftershocks have occurred. One witness told Italian TV he saw part of a building collapse in front of him.