Blatter On Ban: Bribery Is ‘Against My Heart’ 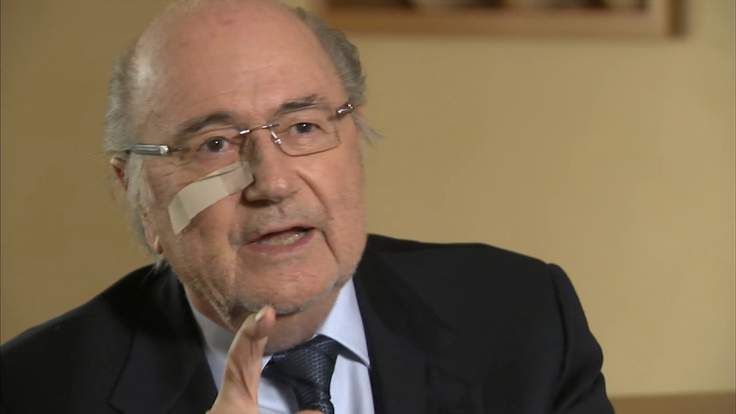 Sepp Blatter has told Sky News that his eight-year ban for misconduct “hurts” and reiterated he has never done anything wrong.

In an interview with Sky’s Paul Kelso, FIFA’s suspended president denied turning a blind eye to corruption and said he cannot be held responsible for the actions of others.
FIFA’s ethics committee has banned Blatter and UEFA President Michel Platini from football-related activities for eight years.
The ban is over a £1.35m payment Platini received from Blatter in 2011, reportedly for consulting work done a decade earlier.
Both Blatter and Platini denied there was anything suspicious about the payment and said that it had previously been agreed in an oral contract.
FIFA judges said they “rejected” evidence concerning such an oral contract as it was unconvincing.
As a result, it was determined that he had breached the rules on offering and accepting gifts and other benefits.
But the committee said there was not sufficient evidence to establish that he had been guilty of corruption under the terms of FIFA’s code of ethics.
Blatter told Sky News: “Saying that I have bribed somebody by paying something – this is absolutely wrong and this is against my heart.
The 79-year-old had earlier said he was sorry for FIFA and for football as he condemned the decision to ban him.
He came out fighting during a news conference in Zurich when he vowed to appeal against the ruling.
Without apologising for what he had done, he said he was sorry that he was “still … a punching ball” and about what his suspension meant for FIFA.
He told journalists: “I’m sorry about me. I will fight, for me and for FIFA.”
Blatter was fined 50,000 Swiss francs (£33,700) and Platini 80,000 Swiss francs (£53,900).
Platini claims that he agreed a £675,000-a-year contract with Blatter but was paid only half of that amount at the time, because FIFA was in financial trouble. He says he then forgot to invoice for the balance until nine years later.
Platini said he too will appeal and will take to the civil courts in a bid to overturn the ban.
The French footballing legend said: “I am determined to apply to … civil courts to obtain damages for all the prejudice I have suffered over very long weeks.”
Read More: http://news.sky.com/story/1609832/blatter-on-ban-bribery-is-against-my-heart