Beyonce Clears The Air About Her Super Bowl 50 “Formation” Performance. 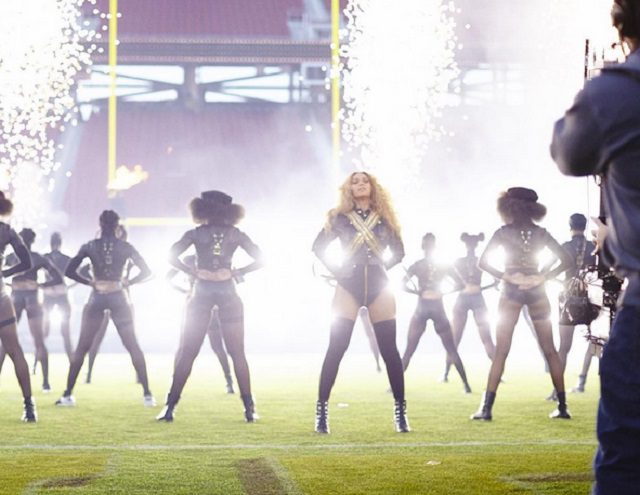 #WeGotYourBack #WeGotItCovered #BreakingNews #HipHopDxNews #USA #EntertainmentNews #Beyonce #FormationPerformance #SuperBowl50 #BlackPanthers
Beyonce’s “Formation” song and performance at Super Bowl 50 caused a stir as people drew comparisons between the singer’s dancers and the Black Panthers and viewed the performance as a tribute to Malcolm X.
Former New York mayor Rudy Giuliani blasted Beyonce for what he deemed a “platform to attack police officers.” The Miami police union called for a boycott of providing security for her “Formation Tour.”
In a recent interview with ELLE magazine, Beyonce clears the air about what the song represents.
“I’m an artist and I think the most powerful art is usually misunderstood,” she says. “But anyone who perceives my message as anti-police is completely mistaken. I have so much admiration and respect for officers and the families of officers who sacrifice themselves to keep us safe. But let’s be clear: I am against police brutality and injustice. Those are two separate things.”
The video showed various representations of Black women in America and included a cameo from Beyonce’s daughter, Blue Ivy.
“If celebrating my roots and culture during Black History Month made anyone uncomfortable, those feelings were there long before a video and long before me,” she says. “I’m proud of what we created and I’m proud to be a part of a conversation that is pushing things forward in a positive way.”
Beyonce is reportedly featuring the parents of Trayvon Martin, Tamir Rice and Mike Brown in a forthcoming video. All three teenagers died after being shot by law enforcement. In Martin’s case, his killer was self-appointed neighborhood watchman George Zimmerman.
The former Destiny’s Child singer says that her time with the group gave her her first boost of confidence that has helped create her career as a singer, performer and businesswoman.
“The label didn’t really believe we were pop stars,” she says of Destiny’s Child. “They underestimated us, and because of that, they allowed us to write our own songs and write our own video treatments. It ended up being the best thing, because that’s when I became an artist and took control. It wasn’t a conscious thing. It was because we had a vision for ourselves and nobody really cared to ask us what our vision was. So we created it on our own, and once it was successful, I realized that we had the power to create whatever vision we wanted for ourselves. We didn’t have to go through other writers or have the label create our launch plans—we had the power to create those things ourselves.”
Beyonce is set to embark on the “Formation Tour” starting at the end of this month.
Source: http://hiphopdx.com/news/id.38227/title.beyonce-denies-making-anti-police-statement-with-formation