Azealia Banks Claims Cardi B Uses Ghostwriters And Has Sex For Raps. 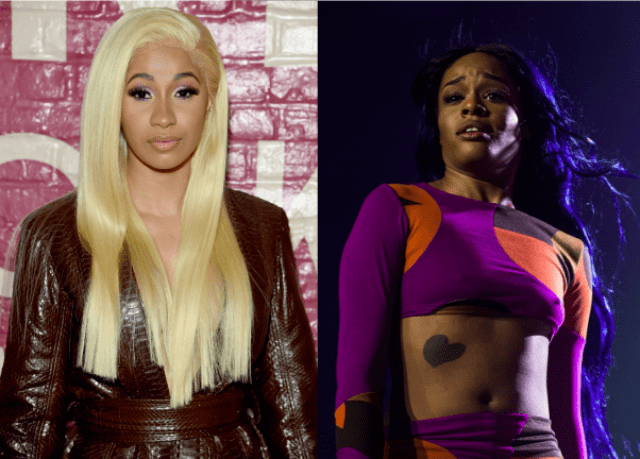 Azealia Banks evidently isn’t done trashing Cardi B. After calling the “Bodak Yellow” rapper a “poor man’s Nicki Minaj” earlier this week, Banks has doubled down with some serious allegations.
In a video captured by a Twitter user, Banks accuses the Love & Hip Hop: New York star of using a ghostwriter for her #1 single and claims Cardi has sex for raps.
She even goes as far as naming the alleged ghostwriter for “Bodak Yellow.”
“We know the nigga from Harlem who wrote the song,” Banks said. “The nigga’s name is Poe. He’s friends with your boyfriend from jail and you fucked. They all call you a smut and say your ass is purple. I’m gonna get that nigga to write for me, too. Kudos dunce.”
She continues with her less-than-flattering Minaj comparison, saying, “Girl, everybody in the hood already said that you fucked for raps. Like, come on, you are the poor man’s Nicki Minaj at this point … I thought you were going to do something original, but you’re the poor man’s Nicki Minaj.”
Banks also lays on the sarcasm, congratulating Cardi on her Billboard Hot 100 #1 before calling her a “fuck toy.”
“Cardi, congrats on your #1,” she added. “Just like you said, like a bum bitch from the Bronx like you, it’s great that you made it, you know. I’m sure it inspires a lot of other bum bitches, but like you know, you suck dick for raps. You fuck for raps … You’re like a fuck toy. You’re like some little like smut that niggas wanna stick their dicks in. You’re going to have your moment now and then you’re going to be gone. Enjoy it.”
Before wrapping up her rant, Banks again considers reaching out to Cardi’s alleged ghostwriter.
“Big shout out to that nigga Poe — that nigga with that slash on his face that writes for rap,” she says. “I gotta connect to that nigga. I might get in the studio with that nigga, too. Shout out to that nigga Poe [laughs].”
Cardi is not one to hold her tongue and already fired back at Banks on Tuesday (September 26) after Banks’ initial negative comments. She took to her Instagram account to share a video of Banks rapping and dancing along to “Bodak Yellow” in a club.
“One of the reasons Bodak Yellow went #1! Cuz even the HATERS love it!,” Cardi captioned the video.
Banks is known for her outrageous antics online. Her Twitter account has been suspended multiple times in the past and she’s earned the reputation as an internet troll.
Source: https://hiphopdx.com/news/id.44760/title.azealia-banks-names-alleged-bodak-yellow-ghostwriter-claims-cardi-b-has-sex-for-raps