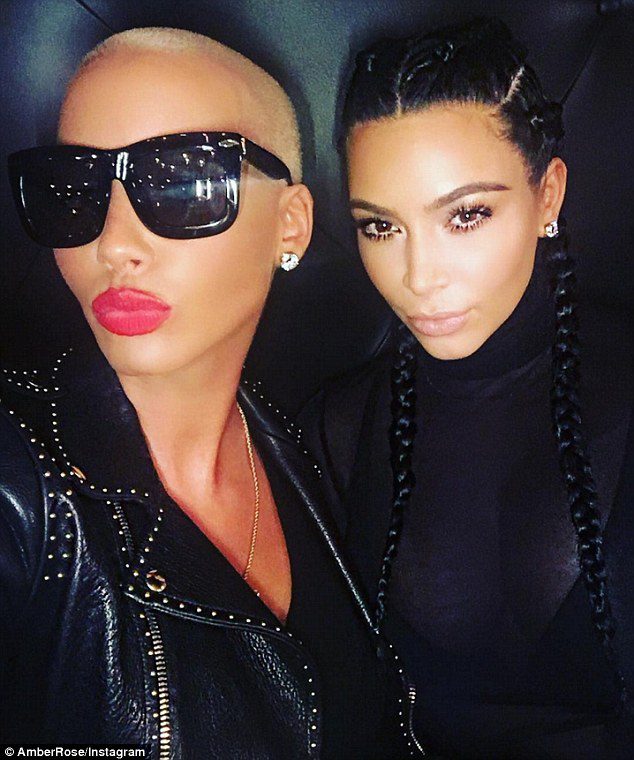 Amber Rose has already stood up for Kim Kardashian’s nude selfie earlier this week.And again the model was in the Keeping Up With The Kardashian star’s corner when she spoke about the selfie controversy on Nightline.

‘I thought she looked beautiful,’ said the 32-year-old ex-girlfriend of Kanye West. West is now married to Kim but the two women have managed to maintain a friendship. Shaking it up: The 35-year-old mother of three posted a photo where she was naked – with black bars across her privates – that stirred up a lot of criticism

Rose also invited Kim to speak at her annual SlutWalk event, which aims to make women unashamed about their bodies and fashion choices.

Her argument: ‘I’m a mom. I know how hard it is to, like, work out and try to get your body back but at the same time, embracing the fact that your body does change after you have a baby,’ said Rose

She DOES have a point: ‘If any sexy guy posted a nude picture with a little black strip over his private areas, everybody would be like, “Damn, he is hot, he’s sexy, look at that body. Oh, he’s a dad too?” It’s just a double standard,’ added Amber

In February Amber and Kim got close after a Twitter feud between Kanye and Amber’s ex Wiz Khalifa, who she has a child with.

‘People think me and Kim are arch enemies and we’re not,’ Amber told Nightline. ‘We literally text each other all the time. We’re very, like, positive towards each other.’

This comes after Amber defended Kim when singer Pink talked out about her.

In a lengthy Twitter post, Pink wrote: ‘Shout out to all of the women, across the world, using their brains, their strength, their work ethic, their talent, their “magic” that they were born with, that only they possess.’

‘It may not ever bring you as much “attention” or bank notes as using your body, your sex, your t**s and a**es, but women like you don’t need that kind of “attention.”‘

She added: ‘Keep on resisting the urge to cave. You’ll never have to make silly excuses for yourself.’

In a second tweet, Pink shared: ‘Last one for the evening: you are all entitled to your opinions and feelings and I am open to hear all of it. But it won’t change my mind.’