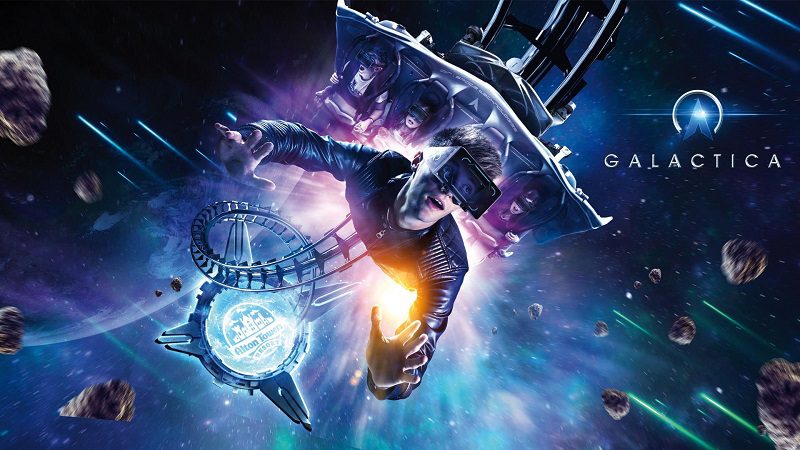 Galactica uses motion sensors next to every seat to link the physical twists and turns to computer graphics played on headsets worn by the riders.
The video takes thrill seekers on a 189-second flight from a space station through an asteroid belt to the canyons of an alien world.
Simon Reveley from Figment Productions, which created the VR ride, said the link between the physical sensations and the virtual world makes for an immersive experience.
“We can amplify things,” he said.
“If we put you on a turn, we can turn you further than you are in the real world.
“As long as we accelerate at the right time, and match the turns, the rest is up for grabs.
“It means there’s a lot of fun to be had with the VR experience.”
We asked Becky Ervin to test the new experience.
She said: “You are going round, twisting and turning. But it’s what you are seeing through the headset that completely changes it.”
The ride at the Staffordshire theme park is a revamp of the Air rollercoaster.
Its launch comes shortly after the Smiler rollercoaster reopened, following a crash in June last year which left five people with life-changing or serious injuries.
Until now, rollercoasters have competed on superlatives.
The Ferrari Rossa in Abu Dhabi is the world’s fastest at 150mph. And the Kingda Ka in the United States is the tallest at 139m.
But Britain’s only “thrill engineer”, Professor Brendan Walker, said VR gives designers new options.
“You are putting a mask over your eyes so you can’t see the real world, so that is going to make you a bit anxious,” he said.
“Because the ride designer has scripted the VR experience to match the physical bodily experience the levels of immersion in the virtual world become even greater.”
Sky News tried the new ride – it is the rollercoaster reimagined.
But computer graphics can’t replace the adrenaline rush of seeing the track fall away and the real world flash by.
Source: http://news.sky.com/story/1668051/the-rollercoaster-reimagined-vr-ride-opens