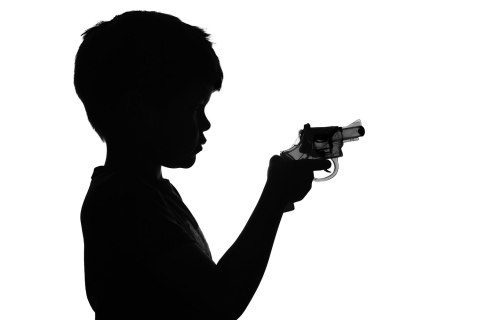 Children as young as 10 have been arrested for firearms offences over the past three years.

A Freedom of Information request revealed that 1,549 children were arrested for suspected firearms offences between 2013 and January 2016, with the number of cases jumping by 20% in the past year.
The cases involve weapons such as air rifles, imitation firearms, BB guns and Tasers.
The FOI requests were sent by the Press Association to all police forces in the UK, with 29 forces responding.
Of those that responded the biggest police force – the Metropolitan Police – recorded the most firearm offences, arresting 679 youths under the age of 18.
Ian Cameron Swanston’s brother was shot dead in Manchester in 1999. He is now a trustee of the charity Mothers Against Violence, which works with young people in communities affected by crime.
He told Sky News that for some young people guns mean status and protection.
“What I’m hearing from young people is that actually I need to protect myself,” he said.
“If I’m going out and I know there’s something going on there’s a sense of it’s easier to carry a knife, carry a gun.
“We’ve created an environment which is quite fearful for young people, they are fearing their own lives, they’re seeing it as an answer.”
School pupils have also been targeted by gangs who use them to hide money, drugs and weapons.
Youth worker and former gang member Jennifer Blake told Sky News children are often used by gangs because they are less likely to be stopped and searched by police.
“A young 10-year-old on a little bike … police aren’t going to think: ‘Yeah, he’s suspicious, let’s stop him’.
“Some of them think it’s exciting until something happens and they realise: ‘Wow, what have I got myself into’.
“Once a young person is groomed, and depending on the perpetrator, the threats that could be given to that young person, fear for their family, they’re going to continue, they’re going to want to go down that road.”
Figures from the Office for National Statistics for the year ending in September 2015, found that the overall number of gun crime offences recorded has risen by 4%.
Here is a breakdown of some of the key  gun crime statistics:
:: The Metropolitan Police said it arrested 679 children –  by far the biggest number
:: Nottinghamshire Police arrested 60 people under the age of 18
:: The Police Service of Northern Ireland reported 23 arrests
:: North Wales Police arrested 14 boys
:: Merseyside Police said 78 youths were arrested
:: West Yorkshire Police arrested 138 children
:: Forces which did not reply included Greater Manchester Police and Police Scotland
Source: http://news.sky.com/story/1668473/child-gun-crime-arrests-rise-by-20-percent-in-uk