50 Little Known Facts About Black People Who Made History 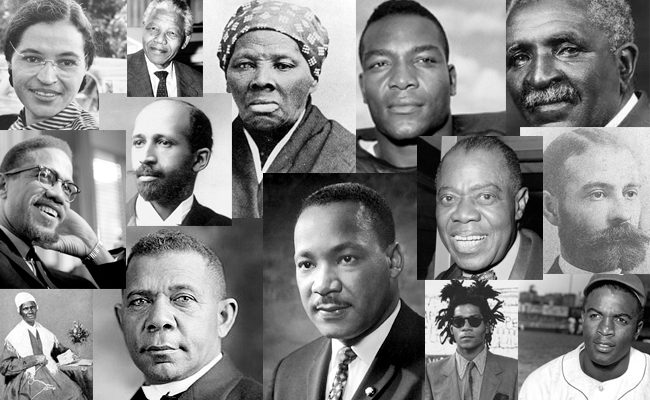 Fact #1: As a child Muhammad Ali was refused an autograph by his boxing idol, Sugar Ray Robinson. When Ali became a prizefighter, he vowed never to deny an autograph request, which he honored throughout his career.

Fact #2: Muhammad Ali, the self-proclaimed “greatest [boxer] of all time,” was originally named after his father, who was named after the 19th-century abolitionist and politician Cassius Marcellus Clay.

Fact #3: Allensworth is the first all-black Californian township, founded and financed by African Americans. Created by Lieutenant Colonel Allen Allensworth in 1908, the town was built with the intention of establishing a self-sufficient city where African Americans could live their lives free of racial prejudice.

Fact #4: Jazz, an African–American musical form born out of the blues, ragtime and marching bands, originated in Louisiana during the turn of the 19th century. The word “jazz” is a slang term that at one point referred to a sexual act.

Fact #5: During the 1930s, painter Charles Alston founded the 306 group, which convened in his studio space and provided support and apprenticeship for African-American artists, including Langston Hughes; sculptor Augusta Savage; and mixed-media visionary Romare Bearden.

Fact #6: Before Wally Amos became famous for his “Famous Amos” chocolate chip cookies, he was a talent agent at the William Morris Agency, where he worked with the likes of The Supremes and Simon & Garfunkel.

Fact #8: Louis Armstrong learned how to play the cornet while living at the Colored Waif’s Home for Boys.

Fact #9: Musician Louis Armstrong earned the nickname “Satchmo” which was a shortened version of the moniker “satchel mouth.”

Fact #1o: After a long career as an actress and singer, Pearl Bailey earned a bachelor’s degree in theology from Georgetown University in 1985.

Fact #11: After African-American performer Josephine Baker expatriated to France, she famously smuggled military intelligence to French allies during World War II. She did this by pinning secrets inside her dress, as well as hiding them in her sheet music.

Fact #12: Scientist and mathematician Benjamin Banneker is credited with helping to design the blueprints for Washington, D.C.

Fact #13: Before he was a renowned artist, Romare Bearden was also a talented baseball player. He was recruited by the Philadelphia Athletics on the pretext that he would agree to pass as white. He turned down the offer, instead choosing to work on his art.

Fact #14: Though he is of Caribbean ancestry and had a trailblazing smash with his 1956 album Calypso, Harry Belafonte was actually born in the United States. The internationally renowned entertainment icon and human rights activist is from Harlem, New York.

Fact #15: Musician and activist Harry Belafonte originally devised the idea for “We Are the World,” a single that he hoped would help raise money for famine relief in Africa. The song was a huge success, going multi-platinum and bringing in millions of dollars.

Fact #16: Before becoming a professional musician, Chuck Berry studied to be a hairdresser.

Fact #17: Chuck Berry‘s famous “duck walk” dance originated in 1956, when Berry attempted to hide wrinkles in his trousers by shaking them out with his now-signature body movements.

Fact #18: The parents of actress Halle Berry chose their daughter’s name from Halle’s Department Store, a local landmark in her birthplace of Cleveland, Ohio.

Fact #19: In 1938, first lady Eleanor Roosevelt challenged the segregation rules at the Southern Conference on Human Welfare in Birmingham, Alabama, so she could sit next to African-American educator and activistMary McLeod Bethune. Roosevelt would come to refer to Bethune as “her closest friend in her age group.”

Fact #20: Legendary singer James Brown performed in front of a televised audience in Boston the day after Martin Luther King Jr. was assassinated. Brown is often given credit for preventing further riots with the performance.

Fact #21: Chester Arthur “Howlin’ Wolf” Burnett was one of the world’s most important blues singers, songwriters and musicians, influencing popular rock acts like the Rolling Stones and Eric Clapton. Howlin’ Wolf maintained financial success throughout his life, held a stable marriage and worked for charitable causes in his Chicago community.

Fact #22: Female science fiction author Octavia Butler was dyslexic. Despite her disorder, she went on to win Hugo and Nebula awards for her writing, as well as a “genius” grant from the MacArthur Foundation.

Fact #23: When African-American neurosurgeon Ben Carson was a child, his mother required him to read two library books a week and give her written reports, even though she was barely literate. She would then take the papers and pretend to carefully review them, placing a checkmark at the top of the page to show her approval. The assignments inspired Carson’s eventual love of reading and learning.

Fact #24: Politician, educator and Brooklyn native Shirley Chisholm survived three assassination attempts during her campaign for the 1972 Democratic nomination to the U.S. presidency.

Fact #26: Dr. Mayme A. Clayton, a Los Angeles librarian and historian, amassed an extensive and valuable collection of black Americana now found in a museum that houses an estimated 3.5 million items. The collection includes works from a wide range of luminaries, including Countee Cullen,Marcus Garvey, Zora Neale Hurston and Lena Horne.

Fact #27: Before lawyer Johnnie Cochran achieved nationwide fame for his role in the O.J. Simpson trial, actor Denzel Washington interviewed Cochran as part of his research for the award-winning film Philadelphia (1993).

Fact #28: Record sales from musician and singer Nat King Cole contributed so greatly to Capitol Records’ success during the 1950s that its headquarters became known as “the house that Nat built.”

Fact #30: Paul Cuffee, a philanthropist, ship captain and devout Quaker who supported a return to Africa for black citizens, transported 38 free African Americans to Sierra Leone in 1815. He also founded one of the first American integrated schools in 1797.

Fact #31: Tice Davids, a runaway slave from Kentucky, may have been the inspiration for the first usage of the term “Underground Railroad,” though the origins of the term are shrouded in mystery. According to reports, after Davids swam across the Ohio River, his “owner” was unable to find him. He allegedly told the local paper that if Davids had escaped, he must have traveled on “an underground railroad.” Davids is thought to have made his way to Ripley, Ohio.

Fact #32: At a time when universities did not typically offer financial assistance to black athletes, African-American football star Ernie Davis was offered more than 50 scholarships.

Fact #33: Thomas Andrew Dorsey, considered the “Father of Gospel Music,” was known for his fusion of sacred words and secular rhythms. His most famous composition, “Take My Hand, Precious Lord,” was recorded by the likes of Elvis Presley and Mahalia Jackson.

Fact #36: Before he wrote the acclaimed novel Invisible Man, Ralph Ellisonserved as a cook in the Merchant Marines during World War II.

Fact #37: Shortly before his mysterious disappearance in 1934, Wallace D. Fard founded the Nation of Islam.

Fact #38: Ella Fitzgerald, known for having a remarkable three-octave range, got her start at the Apollo Theater.

Fact #39: After friend and musical partner Tammi Terrell died of a brain tumor, a grieving Marvin Gaye recorded his future hit single “What’s Goin’ On,” having Detroit Lions’ athletes Lem Barney and Mel Farr lay down vocals for the song’s intro. Gaye later met with Lions’ coach Joe Schmidt to propose the idea of playing for the team, which Schmidt turned down.

Fact #40: Nancy Green, who was formerly enslaved, was employed in the 1890s to promote the Aunt Jemima brand by demonstrating the pancake mix at expositions and fairs. She was a popular attraction because of her friendly personality, storytelling skills and warmth. Green signed a lifetime contract with the pancake company, and her image was used for packaging and ads.

Fact #42: Josiah Henson fled slavery in Maryland in 1830 and later founded a settlement in Ontario, Canada, for other black citizens who had escaped. His autobiography, The Life of Josiah Henson, Formerly a Slave, Now an Inhabitant of Canada, as Narrated by Himself (1849), is believed to have been Harriet Beecher Stowe’s inspiration for the main character in Uncle Tom’s Cabin.

Fact #44: “Strange Fruit,” the song about black lynching in the south made famous by blues singer Billie Holiday, was originally a poem written by Abel Meeropol, a Jewish schoolteacher from the Bronx, New York.

Fact #45: The father of renowned scribe Langston Hughes discouraged his son from writing, wanting him to take up a more “practical” vocation.

Fact #46: Jesse Jackson successfully negotiated the release of Lieutenant Robert O. Goodman Jr., an African-American pilot who had been shot down

Fact #47: The “King of Pop,” Michael Jackson, co-wrote the single “We Are the World” with Motown legend Lionel Richie. The track became one of the best-selling singles of all time, earning millions of dollars donated to famine relief in Africa.

Fact #48: Abolitionist Harriet Ann Jacobs published Incidents in the Life of a Slave Girl in 1861 under the pseudonym Linda Brent. The book chronicles the hardships and sexual abuse she experienced as a woman growing up in slavery. Jacobs fled slavery in 1835 by hiding in a crawlspace in her grandmother’s attic for seven years before traveling to Philadelphia by boat, and eventually to New York.

Fact #49: Rapper Jay-Z reportedly developed his stage name as a reference to New York’s J/Z subway lines, which have a stop in his Bed-Stuy, Brooklyn, neighborhood.

Fact #50: The popular clothing line FUBU stands for “For Us, By Us.” It was originally created by designer Daymond John along with three other friends, and was supported by fellow Queens native LL Cool J